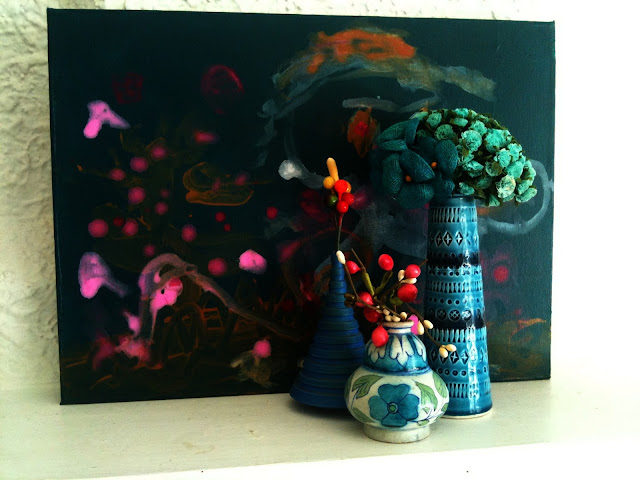 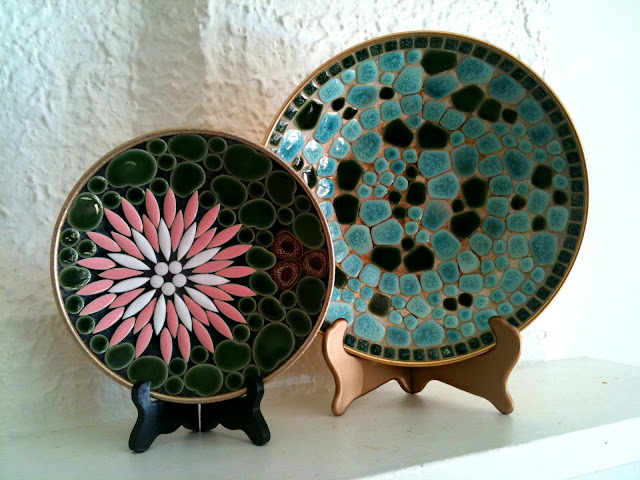 Mosiac dishes, the one on the left is my favourite. 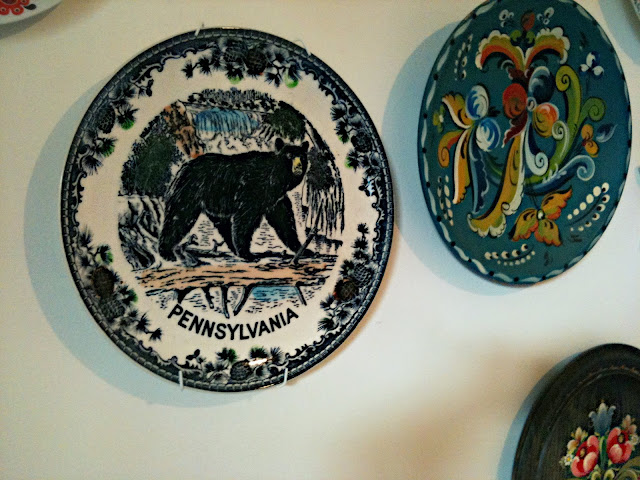 Pennsylvania plate for the plate wall. 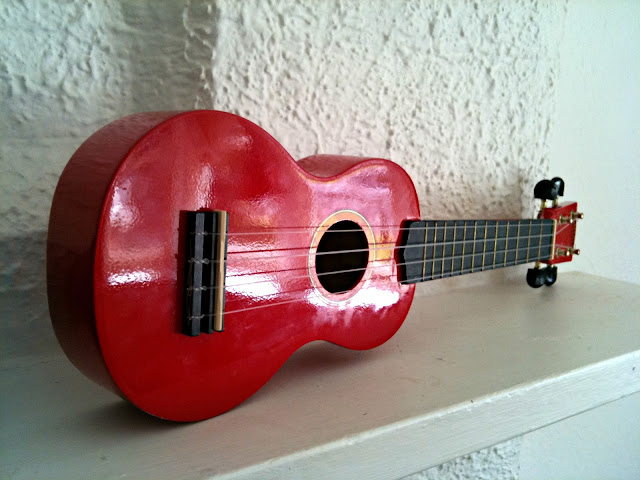 Candy apple red ukelele (I'm secretly hoping to learn to play this).
Just a bit of thrifty eye candy for a lazy Sunday afternoon. I'm just starting to catch up on things and have been enjoying a super relaxing Sunday so I thought I would take some time out from my slothernly state to share a few recent finds with you.
My motivation is sloooooowly creeping back after a rough few weeks and with a bit of sleep under my belt and a regular day to myself once a week you should be hearing more from me soon.
Until next time thrifty peeps, pop over and say hi to Sophie at Her Library Adventures (I hear she's been hitting the New York flea markets).
Posted by Estelle at 4:17 PM 10 comments:

Hello, my life is not very blog friendly at the moment. I am full of things that do not make for nice writing or picture taking so I'm putting 'le blog' on the 'for later' pile and hoping I will see you again soon, life is like that.
Take care
xxxxxx
Estelle
Posted by Estelle at 9:38 PM 9 comments:

It's must be Spring 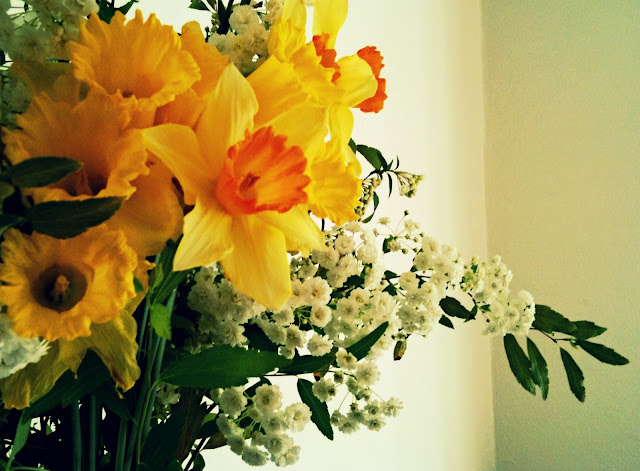 Because Ada want's to know why the Pigeons keep 'fighting' in the front yard, I have a house full of Daffodils and I can't mow my lawn because Fresias have popped up all over the place. Also, there appears to be some frisky Possums having a honeymoon in our roof.

Mr Fortune is on holidays at the moment, it's so nice to have him home and just hanging out. The problem with holidaying at home is the ease with which domestic and familial obligations manage to take up more and more of your free time until you end up with not much of a holiday and a whole bunch of stuff that 'just has to be done'. Last week we sat down with a bottle of wine and wrote down a list of what we wanted to do, then we wrote down what we had to do and finally what other people wanted us to do. By the time we were finished we ended up with no free days and a time deficit of about three weeks......some times it pays NOT to plan things.

So, after some shuffling, cancelling and 're-prioritising' we came up with a new list with a whole lot from list A, a few jobs from list B and basically we are ignoring list C altogether in favour of more from list A.......works for me.

So far we have spent a few days at the beach, gone on a date (first time out together in 2 years)! Slept in, started Freddy in Childcare one day a week, had my hair cut, had a long lunch with a bunch of family over from Perth, watched the first 4 seasons of Time Team (my favourite show in the universe), eaten vast amounts of cheese, drank many bottles of wine and managed to keep the obligation monkeys at bay, so far so good. 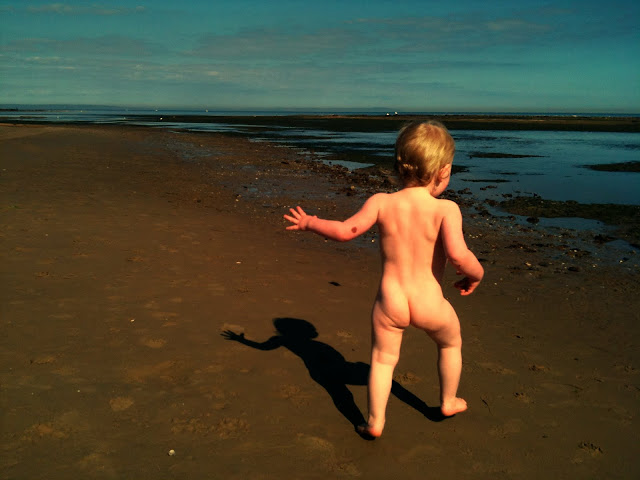 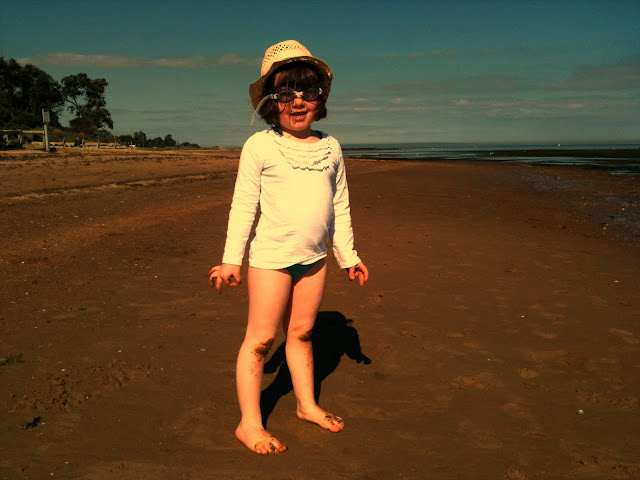 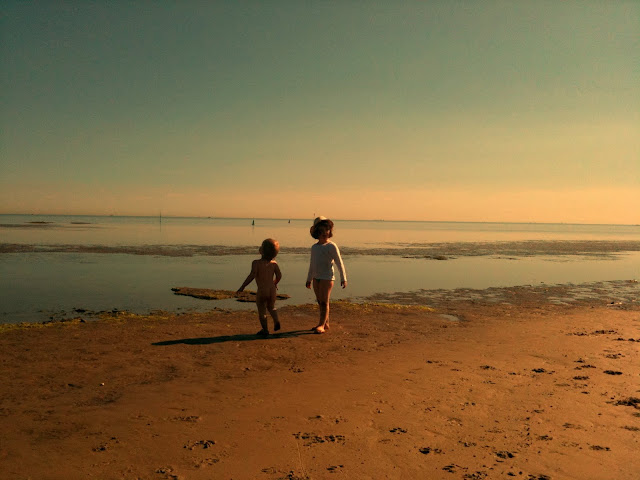 Do you ever occasionally wish you were still a little kid? I do, and not just because I hate paying bills or dealing with the Tax Office or pap smears. I miss being innocent and curious and unafraid. An impromptu trip to beach with the kids this week reminded me of how good it felt to live completely in the moment and do what feels good, just watching them made me feel so incredibly happy. Luckily for the well heeled folks of Brighton I was able to contain my joy and my lily white and rather hefty backside and did not join my kids in their nudey run, but I freaking well wanted too!
Posted by Estelle at 10:44 PM 3 comments: 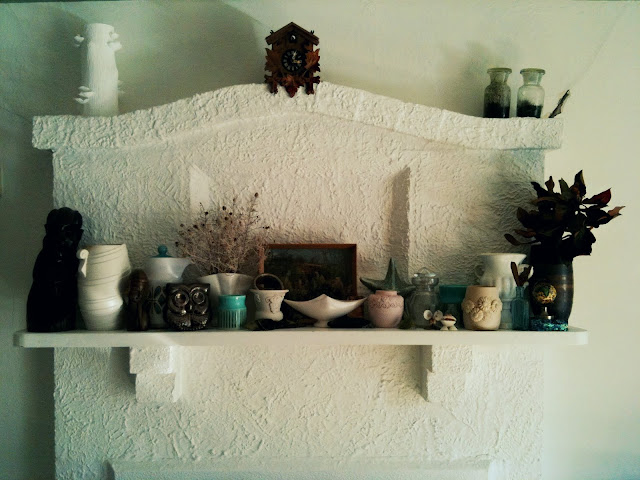 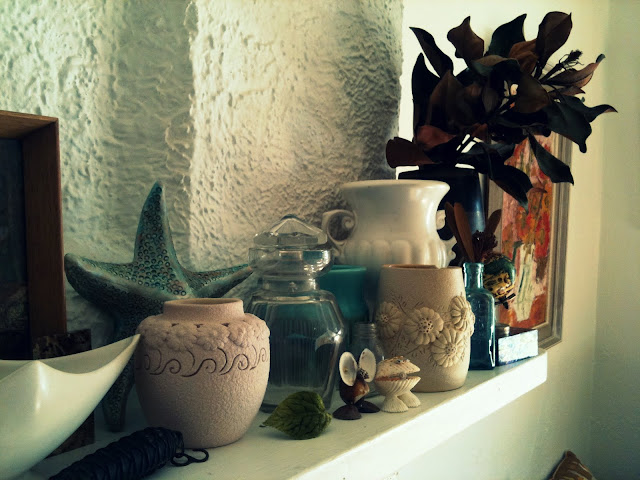 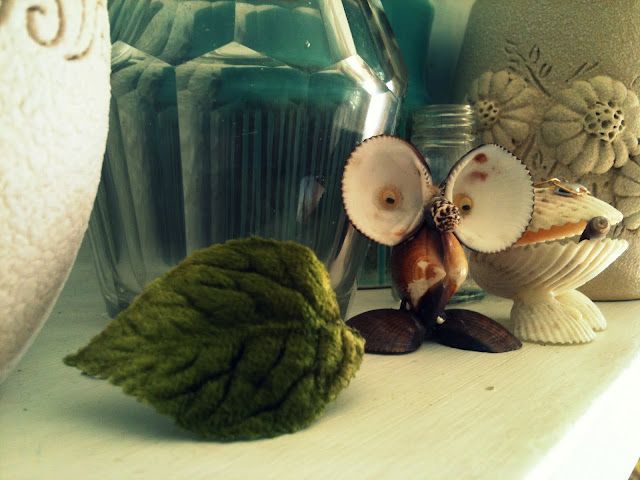 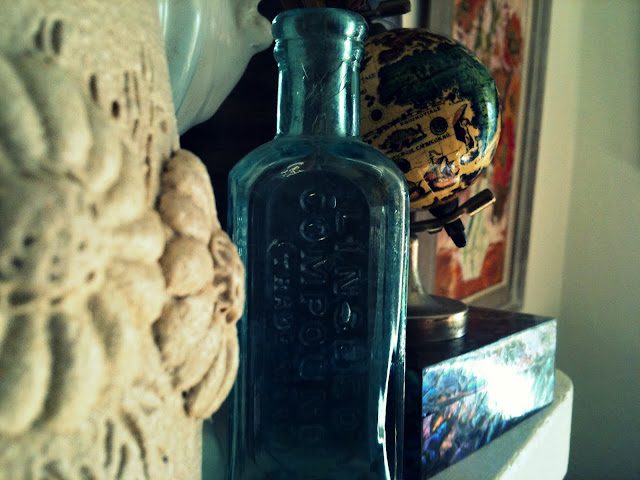 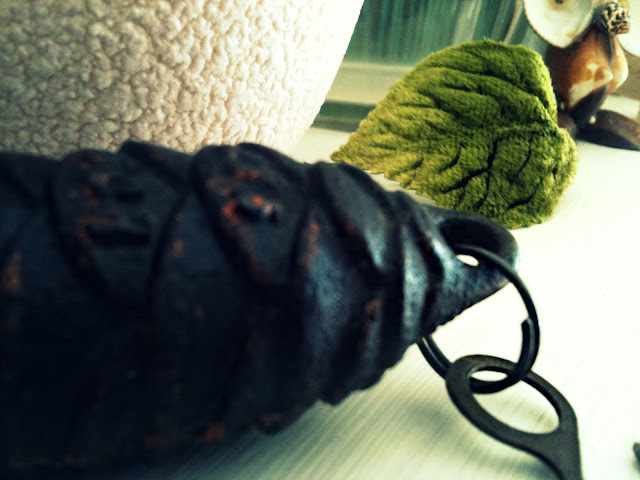 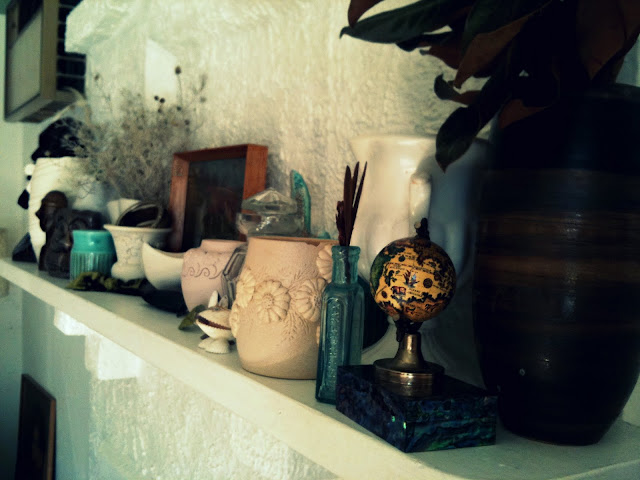 This baby is pretty much a straight up homage to clutter; a "look at how much pretty shit I can cram on a mantelpiece" piece. I look at this mantel and I think 'Aww - pretty' and then my nose starts itching from all the dust and I get over it.

Have you crammed a heap of shit on your mantelpiece? Take a picture and leave your link, let's spread some of that clutter dust around. 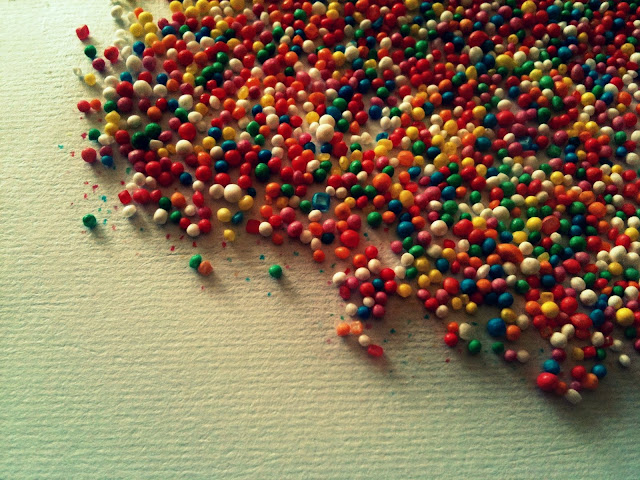 It's been a very long weekend and I am fully shattered. I have no thrifty finds to share because I sold them all at the market today. They must of been the only things I sold because despite the beautiful weather and hoards of people, I didn't really make a lot of cash. I spent my entire Saturday cleaning out my 'studio' *cough* 'spare room' in preparation for a relative from Holland who arrived late last night AND I had to get up at stupid o'clock to go to the market and make no money. So what this means is, I am tired, I am cranky, I have no spare change and my brain looks like a packet of hundreds and thousands spilled all over a bench (as opposed to artfully arranged on a piece of paper).
Until tomorrow friends, I wish you sweet dreams and goodnight.
Posted by Estelle at 9:48 PM 3 comments:

we should probably be feeding some kids, huh?

image from here
Things are looking pretty rough for millions of families on the Horn of Africa right now. The worst drought in 60 years has turned the all ready struggling region into an enormous dust bowl and millions of people have been displaced and are starving. Why this is not on the front page of every paper on the globe is beyond me? Surely the immanent starvation of millions of people is the most pressing social issue the globe is facing at this time?
Social media users are usually pretty quick to respond to a crisis so I thought I would take the opportunity to help you all sleep a little better and encourage you to go to the Red Cross East Africa Drought Appeal and make a donation. Go and feed some folks, you were only going to buy a vintage tea towel with that money anyway.
Posted by Estelle at 3:33 PM 4 comments:

Welcome to Fortune Favours the Thrifty, a blog about hunting, making, markets and probably a whole load of other crap in between. So if you like stuff like I like stuff, then rub my belly, put on your lucky socks and join me on my thrifty adventures!